The Annual Meeting of the IRG which was scheduled for  May 3, 2020 in Doaktown has been postponed due to current restrictions under the state of emergency.  Further arrangements will be announced when they become available.

Upcoming new repeaters and zone changes were among the highlights of the 2019 Fall meeting of the IRG, along with a "heads-up" of two important province-wide exercises coming during October.  And as always, good conversations and good food were enjoyed by the approximately two dozen members present.

The IRG held its 2019 Annual Meeting in Doaktown on Sunday, May 26.  A great turnout, good discussions and delicous food were among the highlights: 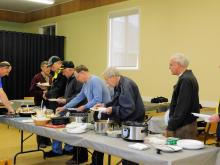 Members attending the April 29, 2018 annual meeting of the International Repeater Group in Doaktown got an update of current activities and some future upcoming events. And of course lots of old and new faces, and great food (more photos to be published soon!) Here is a summary of some of the items.

The annual meeting of the IRG was held in Doaktown on Sunday, April 26, 2015 and was attended by about 30 members and guests.  Here are some highlights of the meeting:

The International Repeater Group (IRG) celebrated its 40th Anniversary at the annual meeting in Doaktown, NB on Sunday, April 27, 2014 and made plans for the year ahead.

The IRG Fall Meeting was held on Sunday, September 22 at Kingsclear Rec Centre, with about 20 members present. Some of the highlights: